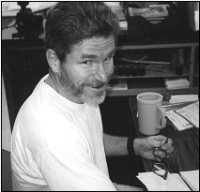 This October 14th marks 40 years that Bill Dunne has been locked up. It was on that day in 1979 that he and two other comrades of his were arrested outside of the King county jail in downtown Seattle during an escape. Bill was sentenced to 90 years for aiding in that escape and since then he has seen some of the harshest prisons in the Washington state prison system as well as the federal system. In 1982 he was sent from the Washington state system to the federal system and landed in the United States Penitentiary (U.S.P) in Lewisburg, PA. The following year he tried to escape from that particular U.S.P and for that he was given an additional 15 years onto his sentence and 7 and a half were to be spent in the control units at U.S.P Marion, IL. After he did his time at U.S.P Marion and up until recently he has been in quite a few maximum security penitentiaries in the federal prison system.

Since 2014 he has been in three different medium security federal institutions here in California. The transition from maximum security institutions to medium security ones in 2014 also was the same year that his first parole hearing took place. In December of 2014 Bill was denied parole and received a 15 year hit. During those 15 years he still has what is referred to as ” interim parole hearings” but he has been denied at both of those he has been to since 2014 as well. The reason they’ve provided each time he has been denied is that he is still in communication with anarchist groups and individuals. We published his statement on the last time he was denied here and the first time he was denied here . Not only are maintaining relationships with like minded individuals inside and outside of prison important to Bill, but he has found great joy in teaching GED classes at almost every prison he has been at so far, and he has helped many prisoners get their GED.

Thankfully over the years Bill has not had any serious health scares until recently. Over the last two years he has needed surgeries in both eyes and finally got them , so his vision is much better and that is much less of a concern now. What the world needs to know though is that Bill Dunne remains in a federal prison today after 40 years of incarceration. His politics and principles are unwavering and his perseverance and will to survive in the face of repression is inspiring. With the help of friends we have created a new support poster for you to put up at your local social center, coffee shop, college campus or wherever you think would be an effective spot to post it and help get the word out about Bill Dunne.

Here is where you can download the poster and if you go to the Support Bill Dunne page on our site you can find a tri-fold flyer that the Anarchist Black Cross Federation has put together as well as a half sheet flyer we put together. There you can find links to other groups that have been supporting Bill over the years as well like the Jericho Movement and 4strugglemag. As October 14th approaches and on that very day let’s recognize who Bill Dunne is , his plight and let’s continue our commitment to raise awareness about him. Let’s tell the world about anarchist political prisoner Bill Dunne! As Bill always says – The future holds promise!