** Update ** Jennifer’s re-sentencing hearing was supposed to be on Friday September 6th . The prison actually forgot to transport her to Sacramento for the hearing. So, at what ended up being a very brief hearing in dept. 20 they continued the proceedings to October 28th where we can expect the re-sentencing hearing to take place. 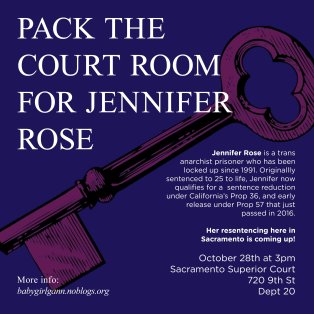 Mark your calendars! Jennifer Rose (who just recently changed her last name from Gann to Rose) has court here in Sacramento on October 28th at 3pm at the Sacramento Superior Court house ( 720 9th st.) in Dept. 20.

Jennifer is a trans anarchist prisoner who has been locked up since 1991. Originally sentenced to multiple 25 -to-life sentences, Jennifer now qualifies for a sentence reduction under California’s Prop 36, and early release under Prop 57 that just passed in 2016.

Her re-sentencing hearing here in Sacramento is coming up! Let’s let Jennifer know we got her back and show up for her that Monday afternoon!

To learn more about Jennifer Rose, her plight and for her current address to use when sending her letters or cards, go here , and feel free to print off the flyer that’s up above to help spread the word. 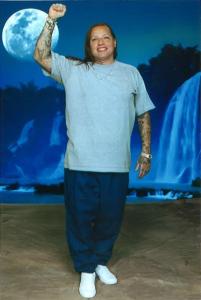