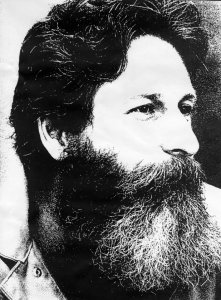 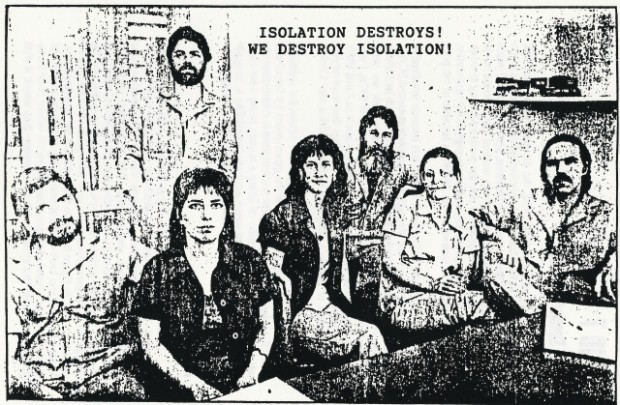 members of the United Freedom Front during their trial; Richard Williams and Tom Manning are in the back, and then from right to left – Ray Luc Levasseur, Patricia Gros Levasseur, Carol Manning, Barbara Curzi, and Jaan Laaman

Tom Manning’s death on July 30 has me in the grip of an emotional riptide. I feel like part of me died with him.

Tom was imprisoned at USP-Hazelton, WV at the time of his death. The ostensible cause of death, according to the Federal Bureau of Prisons, was a heart attack.

I received Tom’s last letter on July 15. He wrote that he was in dire circumstances, his medical needs treated with deliberate indifference, delays in receiving necessary medication, his body weak from lack of oxygen. Supporters scrambled to get a lawyer in to see him, but death arrived first.

Tom battled the Bureau of Prisons criminal negligence of his medical needs for the past 10 years, beginning when he almost died from an untreated knee infection while at USP-Coleman, FL. As a result of that infection, most of his knee was surgically removed and he was wheelchair bound for the rest of his days.

But he was not through fighting.

When he arrived at FMC-Butner, NC for further medical treatment he was kept in solitary confinement under abysmal conditions for 3 years. Much-needed knee and shoulder surgeries were repeatedly delayed until pressure from Tom’s supporters forced the BOP to act. But the surgeries came too late, and combined with the lack of necessary rehab insured that Tom remained in a wheelchair.

Tom always had the warrior spirit, right to his last breath. Many more like him, and the ruling class would tremble. The ache in my heart over his passing will be forever.

In remembrance, I offer words I wrote in 2014 for Tom’s book “For Love and Liberty,” a collection of his paintings:

“When Tom Manning and I first met 40 years ago, we were 27 years old and veterans of mule jobs, the Viet Nam war, and fighting our way through American prisons. We also harbored an intense hatred of oppression and a burning desire to organize resistance.

As members of a community action group called SCAR, we worked its ‘survival programs’ including a community bail fund, prison visitation program, and a radical bookstore. The Red Star North bookstore drew the venom of police – surveillance, harassment, raid and assault.

Tom and I disappeared underground in the midst of this and COINTELPRO revelations. We remained underground for near 10 years, much of it on the FBI’s ten most wanted list. We were tagged as ‘terrorist’ and ‘extremely dangerous’ because as ‘members of a revolutionary group’ we used explosives against targets of empire: predators of apartheid South Africa, Puerto Rico’s colonialism, and the slaughter in Central America.

We considered our work anti-terrorist. It was a time, you see, when activists were killed, imprisoned, tortured and exiled. ‘Winter in America’ as Gil Scott-Heron put it, and raging hell in El Salvador. It was a time when the U.S. sub-contracted its terrorism and if you were on the wrong end of it – you died.

Sometimes when we met underground I noticed Tom sketched on scraps of paper. I was impressed with how well he drew. I said to him – man, you got talent, why not do landscapes, portraits, big pictures! His response – no time for that, for our priority was taking down this wretched system that disrespects and destroys life.

The government’s mandate is that Tom die in prison, as our comrade Richard Williams did in 2005 after a long period of medical neglect and solitary confinement.

Tom has risen beyond the gulag’s attempt to strip his humanity. You can feel the dignity and spirit of resistance in his paintings. He is one of those carrying heavy burdens, be they the ‘sans-culottes’ of the world, a Haitian health care provider, or a victim of police bullets.

Political prisoners do not exist in a vacuum. They emerge from political and social conflicts. The ruling class and media attempt to criminalize, demonize and marginalize these prisoners, because recognition of political prisoners is de facto admission that serious conflicts exist and remain unresolved.

In 2006 an exhibit of Tom Manning’s paintings – ‘Can’t Jail the Spirit’ – opened at the University of Southern Maine. Police organizations throughout the Northeast conducted an intense ‘shut it down’ campaign. The police were particularly disturbed with the characterization of Tom as a ‘political prisoner’ and his painting of Assata Shakur on display. When the police got to the university’s corporate funders, the USM president capitulated and the exhibit was ordered shut down. The exhibit’s supporters then carried Tom’s paintings through the city streets and rallied at Congress Square.

‘There is no speech or language where their voice is not heard,’ reads Psalm 19:3 and the gravestone of Black freedom fighters Jonathan and George Jackson. Voice, through its many forms, articulates vision. Call it subversive art, liberating art, art that challenges the one-dimensional. Tom’s art is a voice among the dispossessed that transcends concrete and razor wire with an affirmation of life.

The paintings of Tom Manning and American Indian Movement activist Leonard Peltier; the creative work of Puerto Rican Independista Oscar Lopez Rivera; the poetry of anti-imperialist Marilyn Buck, which lives on; and the Earth defender poems of Marius Mason; the spoken word of Mumia Abu-Jamal and Mutulu Shakur. They are the voices of our political prisoners, principled and honorable men and women who communicate from isolation and suffering.

We must not let their voices be suppressed. They need to be heard and celebrated by freedom loving people everywhere.”

I extend deep gratitude to all those who provided some measure of support and solidarity to Tom during his 34 years in prison.

FREE ALL OUR POLITICAL PRISONERS 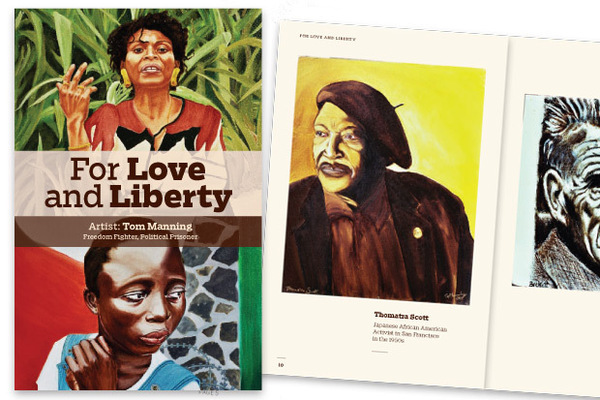 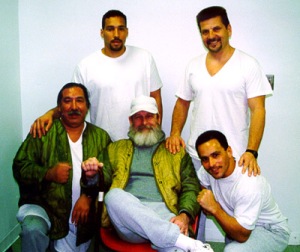